What was Fakhr al-Dīn al-Rāzī up to? Lecture by Prof. Ayman Shihadeh 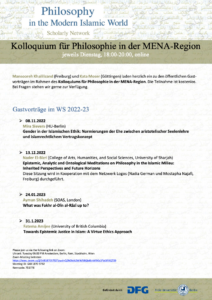 Prof. Ayman Shihadeh is Professor of Arabic Intellectual History at the Department of History and Head of School of History, Religions and Philosophies at SOAS University of London. He is spezialized in the history of the Islamic world, his research focuses on the history of theology, philosophy and wider intellectual and religious culture. His areas of research include the history of systematic theology, the Avicennan philosophical tradition, and the interaction between philosophy and religious thought in the pre-modern Islamic world. Furthermore he is especially interested in metaphysics, epistemology, ethics, anthropology and dialectical practices, as well as the sources and wider environments in which thought developed and was transmitted and contested.

Ayman Shihadeh’s publications include several books, including two monographs, the first on the ethical theory of the influential theologian-cum-philosopher Fakhr al-Din al-Razi (d. 1210), and the second on the little-studied 12th-century philosopher Sharaf al-Din al-Mas‘udi, as well as studies on Avicenna (d. 1037), al-Ghazali (d. 1111), Ash‘arism and Mu‘tazilism.

The lecture will be held via zoom.

Please consult the flyer for more information on the venue and on other talks in this series.