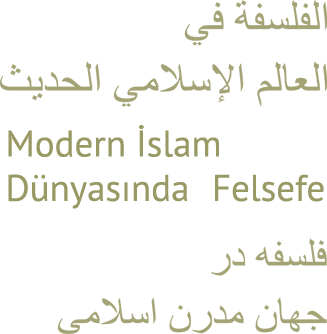 Philosophy in the Modern Islamic World

The scholarly network Philosophie in der islamischen Welt der Moderne / Philosophy in the modern Middle East aims at further developing a newly emerging  research field in the German-speaking as well as international academic  landscape. In the three years of funding by the DFG (2021-2024), transdisciplinary perspectives will be explored in order to sustainably establish research and teaching in the field in constant exchange with colleagues from the MENA region.

Since the middle of the 19th century at the latest, the modern Islamic world has been experiencing a reception of modern Western philosophy, which has also led to a critical re-reading of the classical and post-classical philosophical and theological traditions of Islam. This appropriation of Western and Islamic traditions of thought was initiated by intellectuals and activists who were based in various intellectual hotspots of the Near and Middle East. In the historical context of Europe’s colonial expansion, they began to deal with the political thinking of the Enlightenment, the idea of the nation, and positivist philosophy, sometimes discussed in connection with the philosophical writings of Islamic traditions. In the course of the 20th century, these intellectual debates became more differentiated and professionalized within the framework of the modern universities that were newly established largely following Western models of higher learning. Enlightenment philosophy, liberalism, Marxism, existentialism, hermeneutics, and deconstruction, but also rationalism, mysticism and intuitionism became important elements of social, intellectual, and academic discourses in various regions of the Islamic world.

Neither in Middle Eastern studies nor in historical or let alone in systematic philosophical research in the German-speaking world have these developments been sufficiently investigated so far. The network pursues the medium- and long-term goal of institutionally anchoring the barely developed research field of Philosophy in the Islamic World of Modernity as an integral component in the areas of research and teaching in a sustainable way. More concretely, at workshops and annual conferences, network members will 1) identify and discuss core issues and key concepts in central thematic areas (history of philosophy, metaphysics, and political philosophy); 2) identify key texts in each of the central thematic areas, analyze them in a comparative  manner in relation to their regional and doctrinal contexts, and in this way make them accessible for academic and public discourse; 3) realize concrete publications and discuss and initiate structure-building measures and research projects in order to make the presence of philosophical thought in the Islamic world of modernity and its ongoing intertwining with European intellectual history sustainably visible within the academic but also the general public.

Working meetings of the research network 2021-2024

In a series of working meetings the network will discuss different aspects of philosophy in the Modern Islamic World both from a thematic and methodological perspective. Furthermore, strategies to foster research and teaching in the field will be explored. At the heart of the network are three annual meetings with all members of the network as well as external guests, which provide additional impulses and also contribute to the international and interdisciplinary anchoring of the network. Following the annual meetings, additional meetings on a smaller scale, we call them retreats, building on the impulses from the annual meetings, are devoted to practical implementations and the development of concrete projects with regards to future research and study programs. An international conference to take place in 2024, to which the members of the network as well as selected guests will contribute, will conclude the funding period of the network.

The following presentation provides an overview of the working meetings:

Further information on the working meetings will be announced in due course.